Report on the Liberal Democrat Party conference in Liverpool. 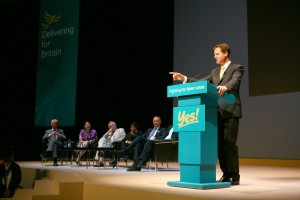 What a busy week it’s been.

It’s the first time (since the 1930s) where the Liberal Democrats have been a Party of Government, and as a result there was more media interest, and interest from “lobbyists” and pressure groups. As a result this was by far the largest Lib Dem (or Liberal) conference in living memory – apparently over 7000 delegates, guests, press, lobbyists and staff!

Conference is a busy mix of debates, speeches, training and“fringe” events. So there was no shortage of events to keep the attendees from Luton busy throughout the week.

Conference kicked off on Saturday with a Conference “rally” with Nick Clegg MP launching the Liberal Democrat support for the “Fairer Votes” referendum next May (when voters decide whether to switch to the fairer Alternative Vote (AV) system of electing MPs).

Sunday saw Q&A with the Deputy Prime Minister, where ordinary Party members got an opportunity to ask Nick about his role in Government. Debates in the main conference hall included an important debate on International Development where Lib Dems re-affirmed our long standing commitment to richer countries donating 0.7% of their GDP to the developing world.

Monday was dominated by the Leader’s speech. Normally we have this at the end of Conference, but Nick Clegg had to go to address the United Nations! You can read the full text here, of the speech here where the Leader sets out how the Liberal Democrats are delivering on our manifesto commitments in Government. The main debate in the hall was on “Free” Schools but also a busy day for delegates training – everything from being a better councillor to communicating well with local people.

Tuesday’s main speech was from Deputy Leader Simon Hughes MP. Delegates passed a resolution calling for equality in the laws around marrage (for mixed-sex and same-sex couples). On Wednesday the main speech for the media was Vince Cable (read here), and delegates reaffirmed Party policy that the replacement of Trident missiles should be reconsidered.

Some in the media probably expected this first conference “in Government” to be a difficult one for the Liberal Democrats. Our experience was the exact opposite. At long last Liberal Democrats are delivering on our promises for a fairer Britain, a fair start for children, sorting out the economy and cleaning up politics.

There is more information on Conference on the national Party website www.libdems.org.uk.